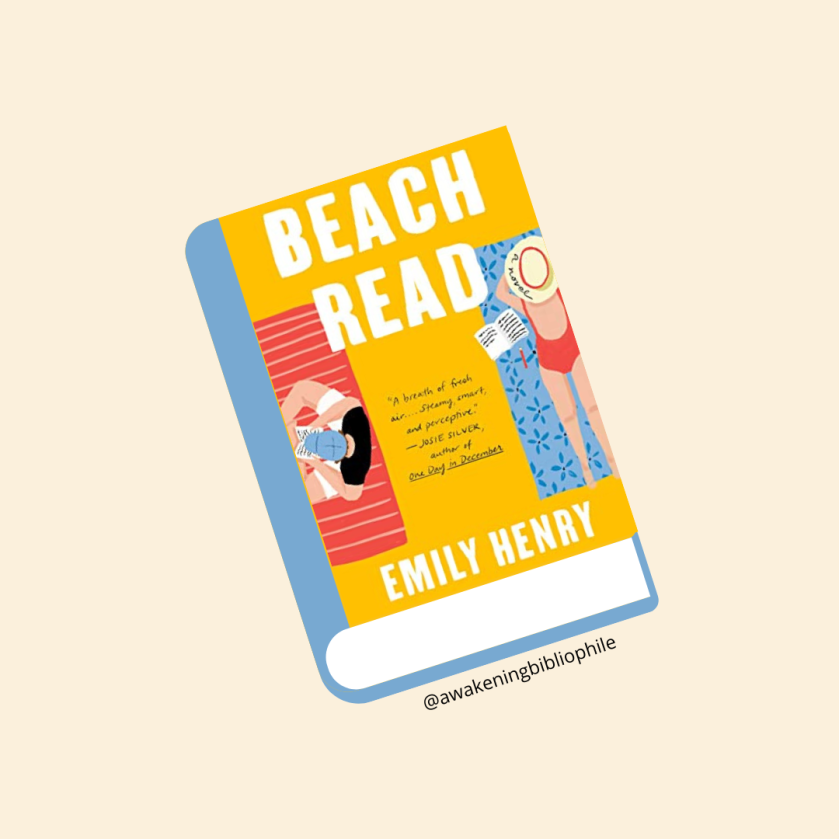 Would I Recommend? Yes!

January Andrews is known for her romance novels. At one point she believed in all things love. She had a relationship that she thought would last forever and she wanted her relationship like her parents. Everyone has secrets though. Following the death of her father, January learns that there were some skeletons in her parents closet. After these secrets are reveal and her perfect relationship fails, believing in love is no longer a reality. As a result, she has been struggling to write her novel. Now she has three months to write her next book…but can she do it?

Her father left her his house after he died. January decided that she would clean it out and spend the summer there trying to write her book. There would be no distractions and it should make it easier. That was until she met her next door neighbor, Gus, who she went to school with and was in constant competition. When the two run into each other in town, both struggling to write their books a competition begins.

Who will win in the end? What other secrets may be hiding? Will January and Gus finish their books? Will they stay enemies?

Only time will tell.

I read this book immediately after finishing “The Dead Romantics.” I didn’t realize it was going to be the summer of writers. There were some similarities between the books: writers, not believing in love, dead father, but there was also a lot that was different.

When I was first introduced to January, I wasn’t sure how I felt about her. She was going through a lot, navigating her feelings and facing the reality of her financial/family situations. Those are places that I can definitely relate to, but I was a little worried that her pity party would drag out too long. Thankfully I did not find that to be the case.

You are quickly introduced to Gus and see another side of January that highlights her inability to cope and forget the past. Gus had other things in mind. As their relationship developed in different ways, I enjoyed seeing how both characters grew, changed and interacted with each other as they tried to write these new books. They also have some wonderful banter; the note passing is adorable!

The challenge that Gus proposed was truly a delight. Seeing how both characters could create a story and the process that they took was interesting. The dichotomy of the types of books each wrote was also fascinating. Usually I tend to focus my reading on romance or women’s literature. It’s not that I don’t enjoy anything else, but it’s what I gravitate to, so seeing a small perspective of thought process for something different was interesting.

Even though I liked both Gus and January, my favorite character was easily Pete. Pete always has something up her sleeve and is the life of the party. She is the person that causes me to squirm when they enter a room or their opinion into my relationships, but I also know they have the best intentions. Pete is witty, carefree, and an interesting business owner.

While I enjoy Emily Henry’s writing style and storylines, storylines were dragged out, and others were not developed enough. I also found that there was a lot of hype around this book, making it difficult to stay objective about it. I would like to mention that I owned this book way before the hype; I just hadn’t gotten to it yet. While there is not a lot of sex or intimacy when it does occur, it’s not too bad. The against the bookshelves, wooh! Loved that!

Do I think this is a good book?

Yes. I really enjoy Emily Henry’s writing style and the way she develops her characters.

Was it really a summer-y read?

While you aren’t sitting on a beach or going on some magical vacation, the majority of the book takes place within the three months of summer (June, July, August). January and Gus still experience some summer activities, such as the 4th of July, summer weather, and sitting on the patio watching the lake.

Would I recommend this to anyone and everyone?

Yes! I would say that this is a loose enemies to lovers, so if that is not your cup of tea then this may not be for you.

If you are looking for a cute summer read about someone trying to overcome their past and explore the future, this book is for you. Like all Emily Henry books, a small surprise occurs within the book designed to pull on your heart strings. Overall, it is a delightful read, and I am sad it took me so long to pick it up.